Micro-camera in the wing spar follow-throughs showed some surface corrosion. I’ve pulled one of the spar mounting blocks for a better look and it may be that it looked worse on the little camera than it is. I’m going to gently scotch-brite the interior of the box section to clean it out as much as possible and then stick the camera down again.

Lots of tidying up last weekend. Got shelves set up and all (most) aircraft parts off the floor.

Got the remainder of the fastenings out of the windshield bottom fairing. There is a wealth of silicone. I expect that despite the lack of bolts in accordance with the STC, this thing was going nowhere ever. It is bonded to the fuselage. It looks like it will require gentle heating around the periphery to get it out. To be continued.

The seats are uncovered and mostly disassembled. The bottom part of the P1 and P2 seats were soft, saggy and generally uncomfortable and the backs had top corners that moved slightly independently of the rest of the seat.

It turns out that when they were recovered in 1978 they went from round-backed to square-backed by means of plywood glue an aluminium sheet and some nails. The plan is to keep the covers if possible, clean, paint, and rebuild the seats.

I’m attempting to strike a balance between keeping the quirky nature of a 170 panel and leveraging modern avionics – while NOT spending a fortune.

To that end, the venturis and gyros are gone and this is the draft of her new panel. I’m planning to print it at scae and stick it to the old panel and decide what I like/don’t.

Again the hours logged against this are a guesstimate over several days of on and off research and sketching.

Reading on the cessna170.org forum about someone’s missing windshield STC for the one-piece winshield in their plane I realized I didn’t see one in 80V’s docs either. Followed the discussion, posted a question and figured out that the windshield is not correctly installed. It appears to be a pre-drilled Great Lakes Aero windshield (https://www.youtube.com/watch?v=UjeLAgmA57A) that is not anchored to the airframe at the top.

Out she comes, which will give me access to the hand holds on the dash which need replacement and the front spare followthrough where the headliner was glued needs cleaning up as I’m not putting a headliner back in, so …

Never been happier to have chosen a “simple” aircraft. The electrical system is no more and I must submit plans for the new one to ILAS. To that end about 20 hours of work during the week, reading Bob Nuckolls (http://www.aeroelectric.com/) and drawing and redrawing circuit diagrams. I lost track so 20 is a minimum estimate … must do better logging.

Everything is now out of the panel. Figured out how to get all the controls out of the panel and despite being aware of the ball bearing in the carb heat control, still managed to lose it. Oh well!

The suction system is removed and a secondary static line that wandered up the A-post and connected the altimeter only has been removed (and retained in case it turns out to be needed.)

I’m starting the CAD work for the new panel and the wiring diagram(s). Away all weekend and next week on familty vacation, bringing laptop to continue research and drawings.

Everything to date has been tearing stuff out for inspection and replacement. All necessary and interesting but I hit a snag with the last few controls on the panel so I decided to work on some cosmetics.

The piano keys are a trademark feature of the 120/140/170 family. The 6 switches protrude through the panel and some designer went a bit art deco with them. I’m keeping them (of course) so they had to be smartened up. This restored Cessna 140 has them aong the bottom of this photo. 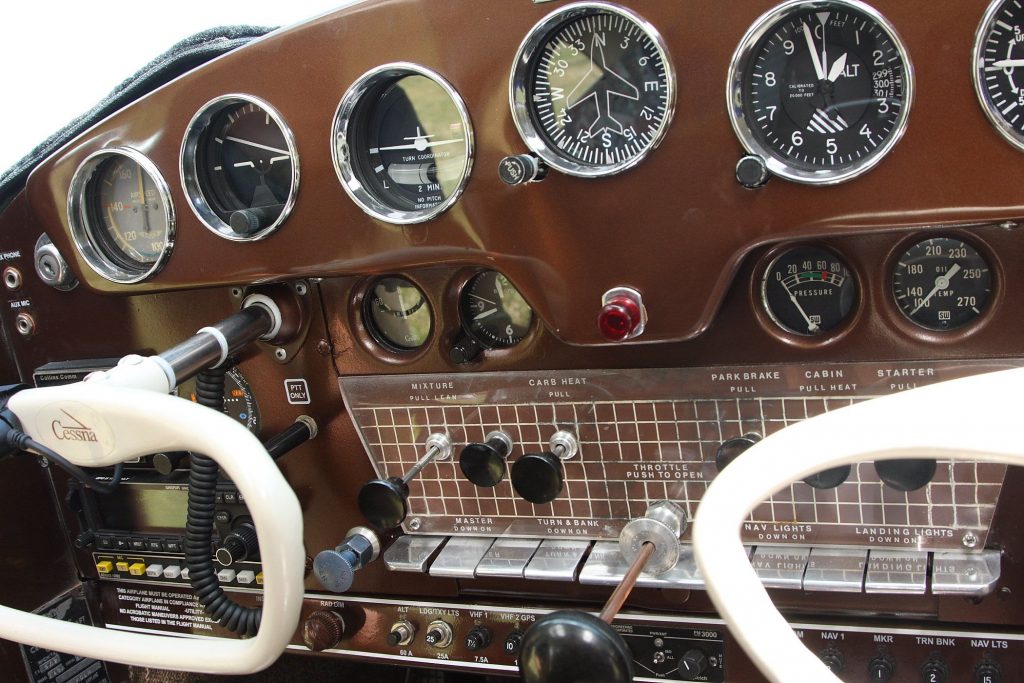 Removed last weekend, they looked like this (except where I had started cleaning: 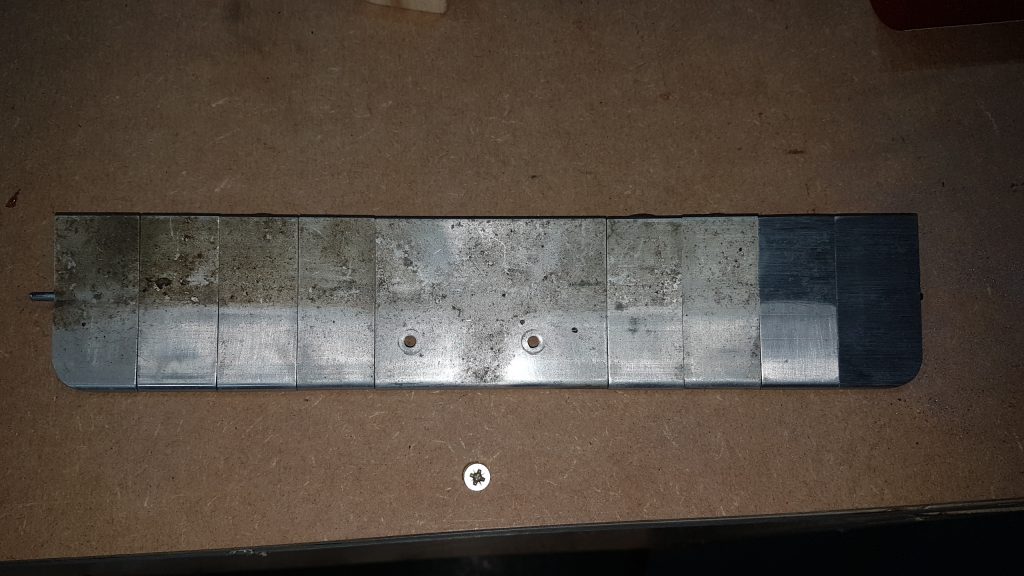 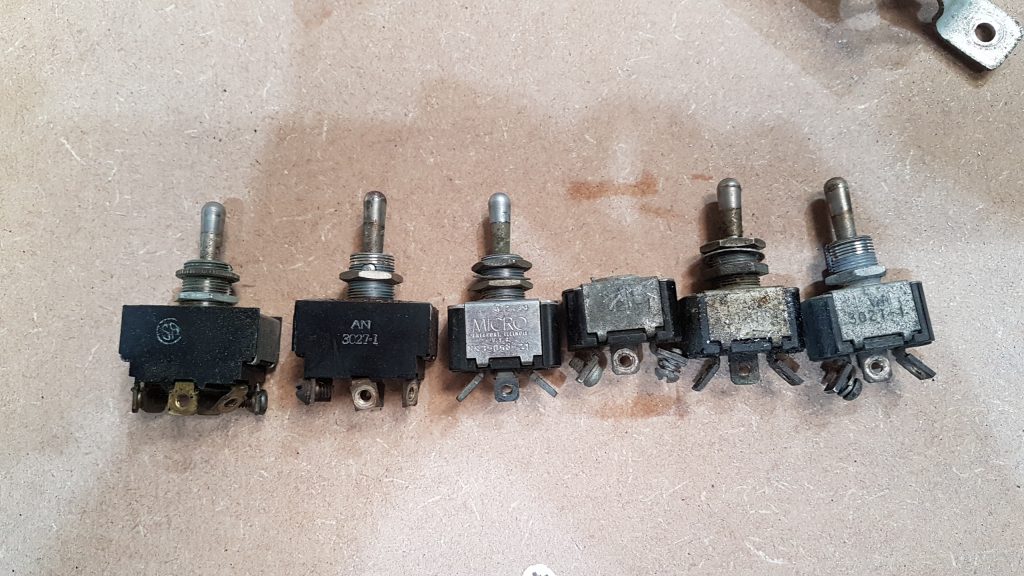 The switches behind them were all different and mostly trashed. One died during extraction. 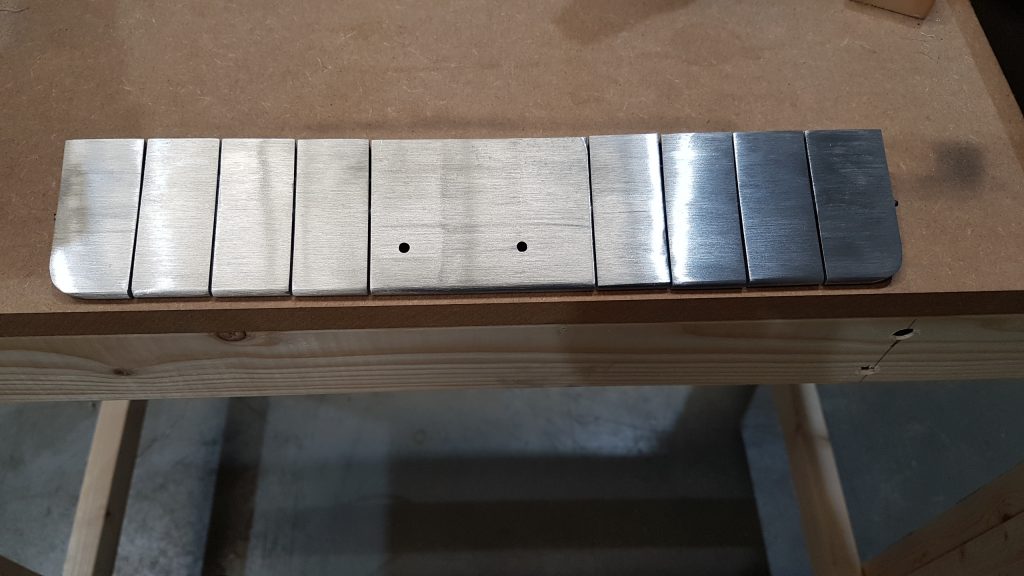 The brushed look is intentional (not original) there was too much pitting to just clean and polish them up. Several hours with grinder and polisher and they look and feel much nicer. Not sure why someone drilled holes in the centre piece; and couldn’t get them symmetrical.

The last 2 screws to remove the switch and breaker assembly took 4 hours to get out. Someone had installed a plastic overlay and it was necessary to disconnect all the controls (carb heat, throttle, etc. to get it loose and access the screws). All that is coming out anyway so nothing lost.

Continued removing interior and panel. Started chopping out the rats nest “harness”. The wiring clearly evolved over time as new systems were added and not all of the vestigial wiring from previous ones was removed. There looked to be at least 5 separate ages of wiring in there and much of the insulation was past its “best before”.

As the aircraft will be VFR day only all the IFR stuff will not be replaced.