Nearing completion of the refurbishment of our 1948 Cessna 170 Rag-wing. The plan was to make it airworthy and as pretty as possible in not more than 500 hours; we stopped logging hours some time ago! Famous last estimates and all … Once that’s done we’ll wet rent it to carefully chosen taildragger pilots!

It’s nerdy but important to note the difference between renovation (make new) and restoration (put back like it was). We are working to get her safely flying and fly her. She will not be show plane pretty and not everything will go back original, especially the panel. She will not fly on the C170 certificate of airworthiness, but rather on a permit-to-fly specific to this aircraft. This is a process managed by ILAS under IAA oversight, in many ways (but not all) similar to Experimental via EAA under FAA oversight in the US. 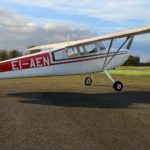 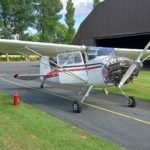 First Engine Run (18 July 2021) - Just what it says on the tin. After much work including replacement of all plugs and the second complete set of fuel lines we fueled her up with 20L of 100LL Avgas and fired up the engine. There was no drama, a couple of minor weeping leaks from the fuel system so on the day […]

Wings and vinyl (15 May 2021) - Putting the wings on was a drama! So much so, that there are no photos. It took 4 of us about 5 hours to get 10 bolts installed with much bleeding and aggravation. After the wing war was won it was on to the vinyl. The only reason for changing from the original design was […]